Ok, I’ve found it. Siwon Lassi Shop, Ck. 26/16-A, Kachouri Gali, Chowk, Varanasi. I has the apple lassi. Today I’m going back for the fruit lassi (apple, pomegranate, and whatever else is in season). Pappu is a master. Images speak for themselves. 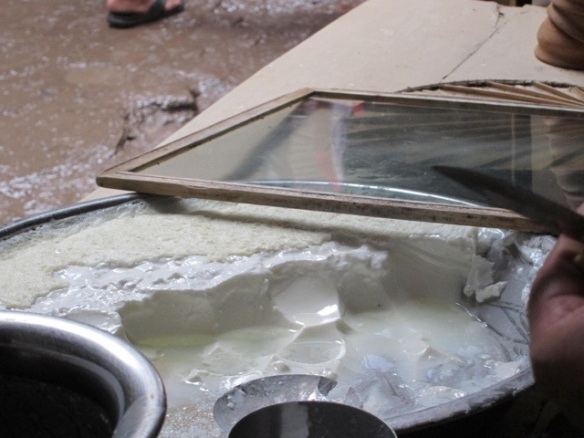 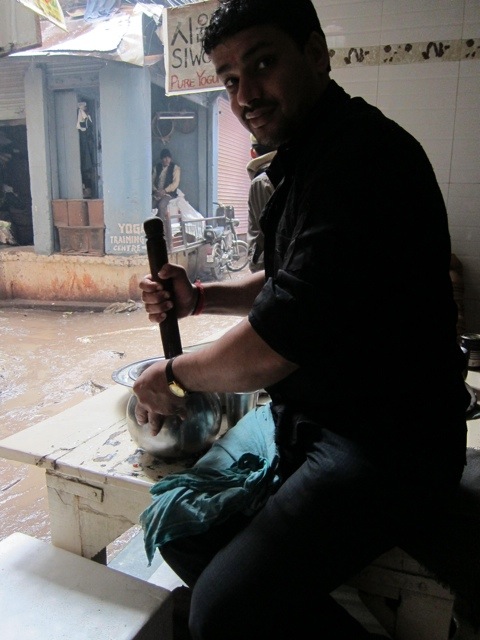 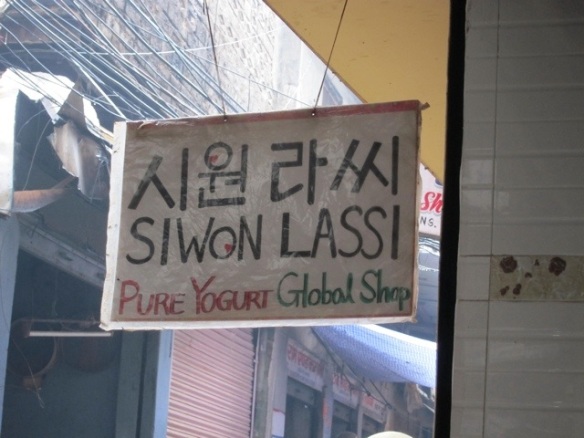 On another note, through a friend, I’ve also found a silk guy, so if you come to Varanasi and want to buy what you know is good quality, beautiful silk (otherwise there is a major risk of being duped), see Arun at Banaras Art Emporium, +91 9839 268 686 or arunbae@gmail.com (explain who sent you). He owns a factory so it isn’t a shop, but a room in his house with cupboards of high quality fabric. He can make anything and will ship. I spent small fortune on silk bedding (there is a tailor who will put together whatever you like).

Today we had some unexpected local treats in Jaipur (the capital of Rajistan — we arrived here last night from Agra where we made the obligatory visit to the Taj Mahal (and it lives up to its reputation)), which topped an already great day. We started off the morning at Lassiwala, a Jaipur institution (since 1944) serving only sweet lassi, a drink of blended yogurt and sugar, and renowned to be the best in town. I have had a number of lassis over the past few weeks and this was in a whole different ball park. Lassiwala makes its curd from a blend of buffalo and cow milk and the resulting lassi is thick and velvety with a bit of a curd skin on top for some texture. I hear there is some great lassi in Varanasi as well, so I will see how that compares; Lassiwala will be hard to beat. 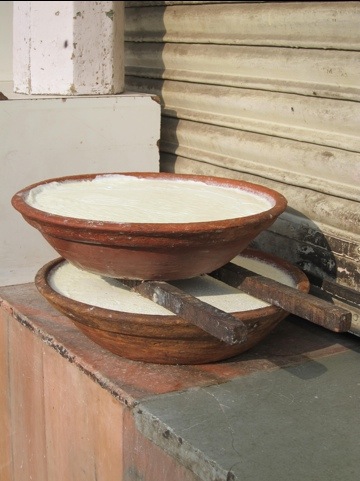 Although the lassi was very satisfying, I was still desperate for some coffee and solid food and on a tip from the guys at Lassiwala, we headed to Indian Coffee House, a cheap as chips co-operative cafe on M.I. Road. This was a great find. We were the only Westerners in the shop and the menu was genuine Indian, right down to the coffees. Josh and I each had a dosa — mine filled with egg and his with spicy vegetables (i.e. masala) — which is a fermented crepe made from rice batter and is a very common Indian breakfast. The dosas came with sauce and a runny side dish, both of which look too unappealing to post, but tasted good. I had a hot cream coffee, which was black coffee served with hot cream on the side, and Josh had a “special coffee,” which was a thick, already creamy hot coffee. 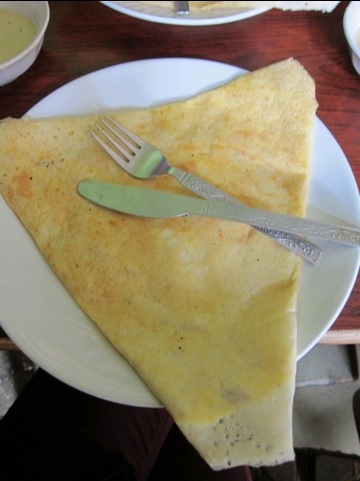 (yes, I know this photo has nothing to do with food, but it wouldn’t be a complete Indian day, or post for that matter, without Sharukh Kahn; and by the way, after watching “Om Shanti Om,” (or click here for a Wikipedia summary), I am a complete Bollywood convert.)

The lassis and dosas kept us full until about 4, when, on our way home, we stopped at a street cafe for some samosas and aloo tikkis (Indian potato patties stuffed with peas and other vegetables). They were served with this delicious chickpea curry side dish that had some sort of sweetish green sauce. Two samosas, two aloo tikkis and a large bottle of water for $1.40. Can’t beat that.

I am slightly embarrassed to say that we polished off lunch with another sweet lassi from Lassiwala (at least we shared just one). To get home, we decided to forego the auto-rickshaw and go for a straight-up pushbike rickshaw. I gave the guy two dollars, rather than the 80 cents the 20 minute ride was supposed to cost. I think in this instance, I understood his head bobble to mean thank you.